I just installed Sanboxie Plus, which I've never used before. It did not put a shortcut on the Desktop like Sandboxie does that allows me to easily run a Sandboxed Web Browser. I do not always want to run my browser Sandboxed, so I don't want to add it to forced programs. I want an easy way like before to run the default browser Sandboxed. Does anyone know how I can do this with Sandboxie Plus? Thank you in advance for any help you can offer.
Top

I have the same problem, where exactly is this "create shortcut" option you refer to? I've looked at both the SandboxiPlus menu option and don't see a create shortcut anywhere.
Top

This may help --- ignore it if it is off track.

The following command opens the Vivaldi Browser in my Sandboxie sandbox called LoginBox:
"C:\Program Files\Sandboxie-Plus\Start.exe" /Box:LoginBox Vivaldi
(The command 'Vivaldi' can be replaced by whatever software is to be launched in the sandbox.)
Parameters can be added to the Vivaldi command, for example:
"C:\Program Files\Sandboxie-Plus\Start.exe" /Box:LoginBox Vivaldi --new-window --profile-directory="Default"

These commands run in a CMD prompt, in a Windows RunBox, and in a LNK file.
They also run in Directory Opus Buttons, and I have set up some useful shortcuts within Directory Opus using commands based on the syntax above.
Top

Took me forever to find that "create shortcut" option too.

Please see attached image. Right click on chrome.exe or any application in sandboxie GUI and you will see the option. 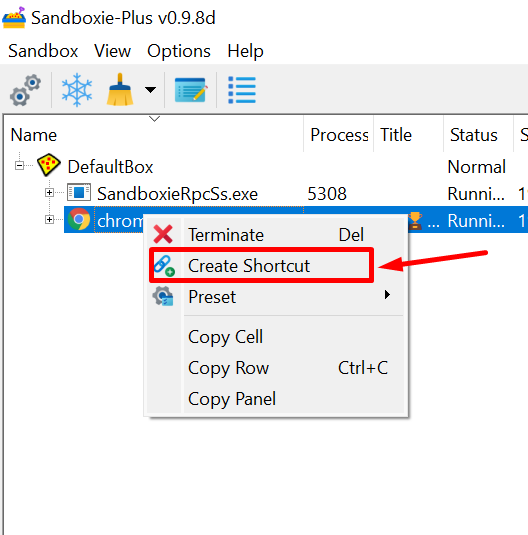